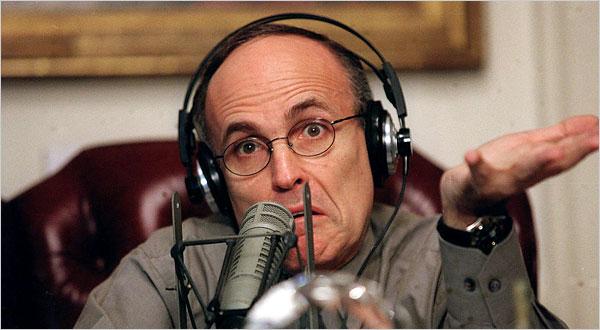 Rudolph W. Giuliani on the radio when he was mayor. His approach to callers often seemed not designed to win their votes.

So what should a mayor do? Just let constituents call his weekly radio program on WABC — the one called “Live From City Hall ... With Rudy Giuliani” — and whine and complain and get in his face without answering back?

Skip to next paragraph

When Joe from Manhattan called in 1998 to complain about the city government giving special parking privileges to a white-shoe law firm, Mayor Giuliani emitted an audible groan into the microphone.

“Well, let me give you another view of that rather than the sort of Marxist class concept that you’re introducing,” Mr. Giuliani said.

When a National Rifle Association member opposed a ban on assault rifles in 1994, Mr. Giuliani really got annoyed.

“Now the reason why the N.R.A. has lost all credibility is statements like that,” he said. “By definition these are attack weapons. They are used for offense. It really is absolutely astounding that the N.R.A. continues to have influence in areas in which they make no sense at all.”

And when Sal from Brooklyn called in 1999 to complain about owners who refused to pick up after their dogs in Marine Park, well, Hizzoner could not contain himself — even with a caller with whom he agreed.

“I get angry about this all the time! When I was a private citizen I would go up to people and tell them they were slobs,” Mr. Giuliani recalled. “I would say: ‘Hey, you’re a real slob. And you’re disrespectful of the rights of other people. Clean up after your dog, damn it!’”

So it went week after week on Mr. Giuliani’s radio program, a 50,000-watt window into the thoughts, preoccupations, resentments and (occasional) joys of the man who ruled New York City for eight high-intensity years.

Giuliani the Presidential Candidate is a pasteurized fellow who favors smiles and reasoned talk and self-deprecating humor (not to mention unexpected cellphone calls from his wife). One can trail him for weeks without monitoring a temperamental eruption.

But to listen to a Giuliani sampler — 55 taped hours of his old radio program, which ran from 1994 to 2001 — is to hear the uncensored and unbowed Mr. Giuliani, an irascible figure familiar to millions of New Yorkers.

He grooved on his unfiltered roar.

“I didn’t have to be a slave to press coverage,” he wrote of his radio program in his book “Leadership.” “I was deliberately going beyond the newspapers, communicating directly to the people.”

The radio tapes offer a rough chart of Mr. Giuliani’s journey from iconoclastic Republicanism in 1994 to something closer to Ronald Reagan-quoting orthodoxy by 2001.

"Isn’t it better they get some humane treatment for themselves?” Mr. Giuliani told a caller.

By 1999, he demanded investigations of Mr. Clinton and argued for Republican-backed tax cuts. And he mocked Hillary Rodham Clinton, his likely rival for a United States Senate seat, when she claimed to have secretly loved the New York Yankees.

“Where was she when Roger Maris hit his 61st home run?” Mr. Giuliani asked in May 1999. “Probably in Illinois somewhere.”

(Mr. Giuliani announced, facetiously, on the radio that he would explore a Senate bid from Arkansas: “I would represent Arkansas even though I’ve never been there, don’t know anything about it, have no connection with it. But, you know, maybe it would be kind of cool.”)

Not every phone call occasioned a mayoral thunderclap. If Mildred from Queens talked about clogged storm sewers or Juanita from the Bronx complained that a center for the elderly was treating her grandmother badly, the mayor became a municipal Mr. Fix-It, listening patiently and delivering services.

But talk smack to him? He’s right back at you. On Aug. 8, 1998, Marvin from Brooklyn complained that the mayor talked too much about the Yankees. (Mr. Giuliani opened summertime programs by examining the Yankees’ prospects and closed with: “Go Yankees!”) Marvin got off the line but the mayor was not finished with him.

“Marvin, where’d you go? You go back into your hole, Marvin? Listen, I enjoy sports, Marvin — you think that makes me a bad person? Marvin, get a life.”

Then there was David from Oceanside, who was president of Ferrets’ Rights Advocacy. He was furious that the city health code had just been changed to bar ownership of ferrets.

The mayor was outraged that David was outraged. They went back and forth during the summer of 1999.

Next Page »
Posted by Teddy Jacobson at 7:45 AM