WHAT HAPPENED TO "NO NEGOTIATIONS WITH TERRORIST COUNTRIES"

DEBKAfile Exclusive: In advance of Rice's Middle East visits Sunday, Washington warns Olmert that its dialogue with Damascus is about to resume

Our Washington and Middle East sources report the secret US message warns Israeli prime minister that the Bush administration has decided to go back to direct diplomacy with Syria during or before the international peace conference opening in Annapolis on Nov.26. The level of the resumed talks has not yet been determined; the US ambassador may be sent back to Damascus to lead his country’s delegation in face-to-face meetings with Syrian officials, repeating the pattern and level the US-Iranian ambassadorial talks in Baghdad (which, DEBKAfile notes, have so far produced nothing).

To calm Israel’s unease about a US-Syrian track running over its head, the American message assured prime minister Ehud Olmert that matters of concern to Israel, such as the future of Golan, will not be addressed, only such issues as Iran, Iraq and Lebanon.

The American Note was delivered as Secretary of State Condoleezza prepares to visit Jerusalem and Ramallah Sunday, Oct. 12, and Israel’s defense minister Ehud Barak is due to pay a working visit to the Pentagon.

Even so, the White House’s change of heart on Syria puts the US-Israeli strategic cooperation on a different, uncertain footing, say DEBKAfile’s political sources.

Officials in Jerusalem are getting worried about Israel being seriously outnumbered and outweighed to the point of isolation at the peace conference. They find it hard to tell whether the Bush is using the dialogue offer as bait to tempt Assad to attend the Annapolis conference, and so prod the Saudis and Egyptians to come too, or has greater significance. In any event, an ongoing US-Syrian dialogue would give the substantial Muslim-Arab bloc invited to the conference an extra boost. Twelve Arab League members as well as Malaysia, Indonesia and Pakistan have been invited, although not all have responded so far.

The Syrian president’s last-minute decision to be there after his insistent denials could introduce a further element of friction to the conference.

While Assad might not go so far as to pack the Syrian delegation with heads of Palestinian groups branded terrorists by the US, such as Hamas and Jihad Islami, who he harbors in Damascus, he is quite capable of sending over Palestinian enemies of Mahmoud Abbas and Salam Fayyad, such as the radical Fatah-Intifada and the Palestinian “Fronts.”

Beirut is getting as jumpy as Jerusalem about the Bush administration’s advance moves for the conference in Maryland, according to DEBKAfile’s Middle East sources.

Saad Hariri, leader of the anti-American March 14 majority coalition in the Lebanese parliament, returned from his Oct. 4 talks at the White House deeply disappointed. President George W. Bush told him that, while the US was committed to building up the Lebanese army as a shield for the pro-Western government in Beirut, he would not back the anti-Syrian army chief Gen. Michel Suleiman’s run for the presidency. The president urged Lebanon’s anti-Syrian leaders to carry on working for a political compromise of the national crisis through deals with Syria and Hizballah.

Hariri was not told of the US president’s decision to launch direct talks with Damascus before he left for home.

Even Hizballah’s leaders are worried; they fear Washington-Damascus talks will end in a Syrian sellout at their expense.

YOU CAN NOT BE THE POLICEMEN OF THE WORLD WHEN YOUR ARMY AND ITS MACHINERY IS BROKEN. THE US MILITARY CONSISTS OF APPROX. 1.4 MILLION OF WONDERFUL DEDICATED SOLDIERS - BUT, THE CHINESE ALONE CAN RAISE AN ARMY OF 200 MILLION MEN OVERNIGHT, AND IN A WEEK THEY CAN RAISE 350 MILLION. WE ARE ON A FOOLS MISSION. ITS ALWAYS BEEN ABOUT OIL AND POWER AND MONEY. ALWAYS FOLLOW THE MONEY TRAIL TO FIND OUT WHAT ANYTHING IS ABOUT. YOU CAN NEVER MAKE A THEOCRACY INTO A DEMOCRACY AS THE NEIGHBORING COUNTRIES WILL NEVER ALLOW IT.

YOU MUST READ ISAIAH CHAPTER 17, VERSE 1

IF YOU WANT TO KNOW WHAT IS COMING AND WHY READ ZECHARIAH CHAPTER 12,13,14 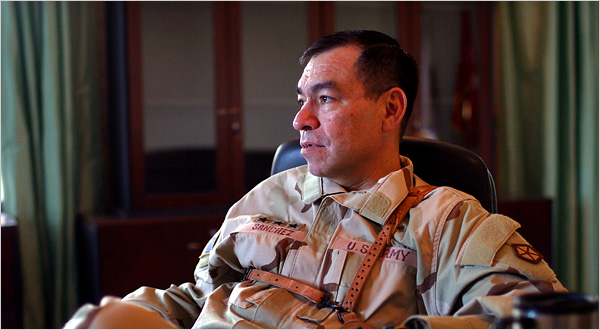 Lt. Gen. Ricardo S. Sanchez, then the top American commander in Iraq, in Baghdad in 2004.

WASHINGTON, Oct. 12— In a sweeping indictment of the four-year effort in Iraq, the former top American commander called the Bush administration’s handling of the war incompetent and warned that the United States was “living a nightmare with no end in sight.”

In one of his first major public speeches since leaving the Army in late 2006, retired Lt. Gen. Ricardo S. Sanchez blamed the administration for a “catastrophically flawed, unrealistically optimistic war plan” and denounced the current “surge” strategy as a “desperate” move that will not achieve long-term stability.

“After more than fours years of fighting, America continues its desperate struggle in Iraq without any concerted effort to devise a strategy that will achieve victory in that war-torn country or in the greater conflict against extremism,” Mr. Sanchez said, at a gathering here of military reporters and editors.

General Sanchez is the most senior in a string of retired generals to harshly criticize the administration’s conduct of the war. Asked following his remarks why he waited nearly a year after his retirement to outline his views, he responded that that it was not the place of active duty officers to challenge lawful orders from civilian authorities. General Sanchez, who is said to be considering a book, promised further public statements criticizing officials by name.

“There was been a glaring and unfortunate display of incompetent strategic leadership within our national leaders,” he said, adding later in his remarks that civilian officials have been “derelict in their duties” and guilty of a “lust for power.”

But his role as commander in Iraq during the Abu Ghraib prisoner abuse scandal leaves General Sanchez vulnerable to criticism that that he is shifting the blame from himself and exacting revenge against an administration that replaced him as the top commander in the aftermath of the scandal and declined to nominate him for a fourth star, forcing his retirement.

Though he was cleared of wrongdoing in the abuse matter by an Army investigation, he nonetheless became a symbol, along with officials like L. Paul Bremer III , the chief administrator in Iraq, of the ineffective American leadership early in the occupation.

Questioned by reporters after his speech, he included the military and himself among those who made mistakes in Iraq, citing the failure to insist on a better post-invasion stabilization plan.

But his main criticism was leveled at the Bush administration, which he said he said has failed to mobilize the entire United States government, other than the military, to contribute meaningfully to reconstructing and stabilizing Iraq.

“National leadership continues to believe that victory can be achieved by military power alone,” he said. “Continued manipulations and adjustments to our military strategy will not achieve victory. The best we can do with this flawed approach is stave off defeat.”

Asked after his remarks what strategy he favored, General Sanchez ticked off a series of steps — from promoting reconciliation among Iraq’s warring sectarian factions to building effective Iraqi army and police units — that closely paralleled the list of tasks frequently cited by the Bush administration.

But he said that the administration had failed to craft a detailed strategy for achieving those steps that went beyond the use of military force.

“The administration, Congress and the entire inter-agency, especially the State Department, must shoulder responsibility for the catastrophic failure, and the American people must hold them accountable,” General Sanchez said.

Posted by Teddy Jacobson at 6:46 AM