AMERICA HAS WON ITS LAST WAR

Unwinnable Wars
July 26, 2010 | From theTrumpet.com
The experts seek ways out of Iraq and Afghanistan without loss of face and credibility. Their efforts are doomed to fail.

Herbert Armstrong said it decades ago, “America has won its last war!”

Yes, once again, he was right. World War ii was the last great conflict that the Anglo-Saxon nations clearly won in a victory which vanquished the enemy and brought a very temporary peace to the world.

But that peace did not last. Hardly had the smoke and dust of war settled when Russia revealed its true imperialist intentions. Soviet-style communism was intent on global rule. The Communist message appealed to Chinese elites. The result was the Korean War, followed by the Vietnam War. The West failed to win in both Korea and Vietnam. The United States was sent packing with its tail between its legs in Lebanon, Rwanda and Somalia. It is patently failing in Iraq and Afghanistan.

Following the end of the 40-year Cold War, terror attacks mounted by Islamist extremists on Western targets escalated. The U.S. and Britain became particular targets of terrorists. The horror of 9/11 showed just how significantly emboldened these terrorists had become as a result of Western society growing too weak in will to win and too profligate in habits to pursue any war to real victory.

In a commentary on the state of military preparedness in the United Kingdom, the SpectatorJuly 17). observed, “The last decade saw the British government fight five wars on a peacetime budget, thereby stretching the military to (and often beyond) breaking point. The cost of this was avoidable deaths and inevitable defeats”

Faced with drastic cuts in Britain’s defense budget, much of it at present committed to the war in Afghanistan, the nation’s new defense chief, Sir David Richards, has opined that “perceived defeat in Afghanistan will be calamitous for Britain’s status as a world power, badly damaging our power to speak softly while carrying a big stick. [O]ur enemies will be emboldened. The world would become more dangerous” (ibid.).

In America, the current U.S. administration has committed to draw down its military engagement in Iraq and transfer its principal war focus to Afghanistan. All that remains in respect of Iraq is a negotiated settlement which, inevitably, will yield up control of Iraq, either directly or indirectly, to that perverse terror sponsor Iran. Then yet another war will be lost to the West.

The British ought to have known from their own past history in Afghanistan. Russia’s failed Afghanistan experience certainly taught them the lesson that the Brits, the Americans and their allies in the Afghanistan conflict have also had to learn the hard way. You never win in Afghanistan!

U.S. Secretary of State Hillary Clinton voiced the obvious at the Kabul conference when she declared, “Citizens of many nations represented here, including my own, wonder whether success is even possible—and if so, whether we all have the commitment to achieve it.”

Thus it was that a gathering of national representatives in Afghanistan’s capital gave the impression, almost to a man, that they were all weary of the loss of life, the destruction of property, the huge expense, the corruption of the Karzai government, the general untrustworthy nature of the locals that all make up the sad equation of the Afghan war.

Those assembled ostensibly did so in what the Economist termed, “The hope … that this might prove to the world that, nine years after the international community descended on the pile of rubble made by 30 years of war, Afghanistan’s government is on the way towards being able to look after itself” (July 20).

Some hope. Some vain hope!

History will prove other wise in the wake of the impending withdrawal of those who have fought the battles for Afghanistan over the past 40 years. It is inevitable. The very nature of the Afghan people, the nature of their enemies, the war-weary mindset of their “protectors” all will work to guarantee the grand failure of all that the West has sought to implement in Afghanistan.

One of the key factors that will work to further entrench instability in Afghanistan will be the impending withdrawal of the U.S.-led coalition in another war—Iraq. Nothing appears to have changed in the Obama administration’s stated policy to have all U.S. combat troops out of Iraq by 2011. A few months ago the New York Times noted the conundrum that President Obama faces on this question: “The situation presents a test for Mr. Obama’s vow to end the war, perhaps the most defining promise he made when he ran for president. While Mr. Obama has proved flexible about other campaign promises and deadlines, his plan to pull out combat forces by August and the remaining 50,000 trainers and advisers by December 2011 has been the most inviolate of policies” (April 27).

So “flexible” has the American president been on so many of his campaign promises that if he dares to become “flexible” on the Iraq withdrawal it could excessively exacerbate his already rapidly declining support from the American electorate. For this reason, we doubt the president will publicize any change in this policy till the fall election results are in.

Either way, Iran, the Wahhabi Saudi underwriters of terror and the Taliban insurgents all read the writing on the wall. The U.S. may have the military hardware to blow them all sky high, but both the public and the current U.S. administration lack the spine to use that power to vanquish terror from the Middle East and from further threatening incursions into the Anglo-Saxon nations.

But what they are beginning to witness, and will increasingly fear, is the assertiveness and determination of Germany’s minister of defense, Karl-Theodor zu Guttenberg. Those terror mongers that have any capacity for logic and any access to reliable intelligence must clearly see that Germany’s defense minister is embracing the every same strategy that led to phenomenally successful results against Germany’s declared enemies in the early stages of World War ii. The military elites in Germany are gearing for blitzkrieg, and their first victim will be the upstart extremists of Iran.

Guttenberg is clearly steamrolling ahead with a total revamp of the structure of the Bundeswehr. He is intent on upgrading its officer cadre to the very best of professional status, its supportive military industry to a consolidated well-oiled machine Europe-wide, its equipment, logistics, communications and military intelligence plus it space-age surveillance capacity to cutting-edge state-of-the-art. In the process, he is carefully underwriting a change in mood within the German electorate to the point where it will embrace the concept of active military involvement in theaters of choice, globally.

In this latter effort, Guttenberg is way ahead of Britain and the United States. He is on the same page as those who are needling away so successfully at the West in the war on terror. As the Spectator so rightly comments, “The battles of the next decade will be fought … for influence. That is why Hezbollah’s leaders have become world experts on post-conflict reconstruction, realizing that every conflict is now a battle for hearts and minds. … From Iraq to Afghanistan, everyone is now fighting for the same objective: popular control” (op. cit.).

This has been the Anglo-Saxons’ great mistake. Their leaders have lacked the vision to turn the minds of the masses to support for victory rather than settling for unworkable compromises with the enemy. This outcome is entirely consistent with the biblical prophecy that our nations are in the literal process of perishing due to the overwhelming lack of real vision in their leaders (Proverbs 29:18).

There is an institution that has proven its power in Europe to win over hearts and minds to its cause either voluntarily or by force. Its vision is long term, extremely long term. In fact, it is as old as ancient Babylon. Throughout its modern history it has been referred to as “the Holy Roman Empire.” It has a record of garnering mass support for crusading wars over many generations. It is an institution not happy to accept defeat in its efforts to embrace the world with its ancient ideology. Its seat of power is in Rome.

For over 30 years its heads have been calling on Europe to return to its ideological Roman roots. Pope John Paul ii set the scene for the beginnings of this crusade upon his election to the papal throne. His successor, Pope Benedict xvi, has continued emphasizing that theme.

With the return of the significantly Roman Catholic nations of Eastern Europe to Rome’s fold following the collapse of the Soviet empire, Rome stepped up its campaign for seizure of the hearts and minds of Europe’s masses. This has engendered a powerful anti-Rome campaign from secularists and liberals in Europe, with much support from a secular press fearful of a return to Middle Ages-style censorship should Rome get its way.

The Vatican is employing every available and relevant high-tech method in this war for the minds of the people. Last October, during an assembly of the Pontifical Council for Social Communications, the pope declared, “[A] genuine revolution is taking place in the realm of social communications of which the church is ever more responsibly conscious. These technologies make possible a speedy and penetrating communication,” and talked of a continuing “careful analysis on the presence and action of the church in this field.”

Both Guttenberg’s defense strategy and Pope Benedict’s initiatives to gear the Vatican to effectively exploit high-tech media are part of the equation that will soon merge Rome and Berlin in a common strategy to influence the minds of Europe’s masses to support one final great crusade in the name of the Holy Roman Empire. Then the gainsayers who mocked Herbert Armstrong will know, without doubt, that he was right!

Britain and America won their last war 65 years ago. Bible prophecy indicates that a resurrecting Holy Roman Empire has one last great battle to fight, after which it will cease to exist forever. After that will occur a huge mind change in the nations of Israel as Almighty God turns the hearts and minds of the people toward obedience to Him and to outgoing concern for their neighbor. The “battle for hearts and minds” will be won by the Creator Himself! Then the world will witness “post-conflict reconstruction” of an order far surpassing anything humankind has ever witnessed. Then, and only then, will wars and strife among humankind cease and the peace of God spread internationally to be enjoyed by all people on Earth.

You need to read our booklet He Was Right. It supplies powerful proof of manifold events prophesied in detail by Herbert W. Armstrong decades before they happened. It will prove to you just where God is working today to revive the work that He established through Herbert Armstrong during the last century—a work that even now is being positioned to bring to the world that same message that Herbert Armstrong delivered yet with far greater impact due to the urgency of the times in which we live today. •

Posted by Teddy Jacobson at 7:21 AM 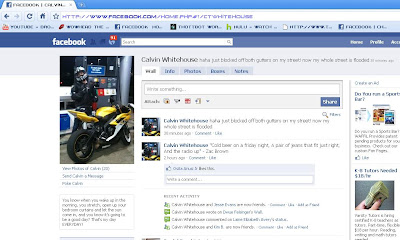 Posted by Teddy Jacobson at 7:28 AM